Why? Eighteen years of exposure to the desert sun had taken its toll on the 3,250 zinc-plated screws holding the dozens of corrugated steel roofing panels in place, (see image below). 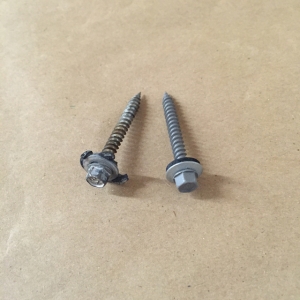 The screw on the left is an original – that rubber washer has certainly seen better days! The screw on the right, (an exact match to the original), is what I’ve installed – what a big difference! The zinc plating is fresh, the steel washer is slightly domed and the rubber washer is pliable enough to form a water-tight seal when the screw is cinched down.

Each spring Bill Byrne would spend several mornings on the roof tightening each of those 3,250 screws down. Why? The hot/cold temperature cycles the roof was subjected to throughout the year would literally back some of the screws out ever-so-slightly, hence the need for him to tighten them back down again. After we bought the Byrne residence, Bill graciously offered to show me how he’d done it for the 12+ years they’d owned the house.

This next image, (below), depicts the conditions found on a typical 36″ wide panel. There would be a lot of screws that look just like that one on the left, (above), as well as a few dozen covered with a dob of silicone shaped like the top of a soft serve ice cream cone! Take a closer look at the photograph again. Can you see those three screws covered with silicone in the lower portion of the image? That’s an example of how Bill Byrne cleverly dealt with a screw that was no longer cinching down tightly to the 5/8 inch plywood underlayment beneath the corrugated steel panels. Even if a screw wouldn’t cinch down, it still needed to be sealed off from the weather so water could never get underneath the rubber washer. Ingenious. 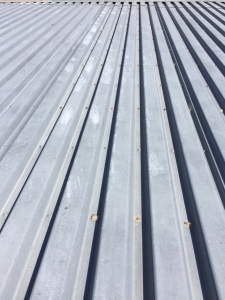 Each year Bill would have to apply silicone to a handful of screws on pretty much every panel, and after this springtime ritual became my responsibility in 2011, I had to do the same thing.

To be clear, with 3,250 of these 1/4 inch head, 1 1/2 inch long zinc-plated #9 screws in place, and another thousand 5/16 inch head, 1 1/2 inch long zinc-plated self-tapping #9 screws securing the lapped joints and perimeter of each corrugated panel, there was never a concern with the structural integrity of the roof – it was, (and still is), always a priority to preserve the water-tight seals everywhere on the roof, period.

…and it was this over-arching concern about making sure water never got beneath the corrugated panels prompting my decision to replace all 3,250 of those 1/4 inch head, 1 1/2 inch long zinc-plated #9 screws!

Happily, the 5/16 inch head, 1 1/2 inch long zinc-plated self-tapping #9 screws used to secure the lapped joints and perimeter of each corrugated panel are in fine shape – none of them have ever been covered with a dob of silicone, and they rarely, if ever, seem to loosen up. That said, they too are carefully checked each spring – if they need tightening, they get tightened – but so far, they’re not a concern.

After deciding I would, in fact, tackle this rather daunting replacement project, I needed to formulate a game plan. How many screws would I need? Were there different-sized screws used anywhere? Would I need anything besides boxes and boxes of screws and a few tubes of silicone? How long would this take? What were the weather predictions for the next month?

…and the biggest question of all – would my knees hold out? 🙂

I spent several hours up on the roof one January morning creating a basic schematic of the corrugated panels, estimating the number of screws per panel, double-checking screw sizes by removing, (and then putting back), several from two or three corrugated panels I chose at random. What I hadn’t figured out – yet – was what to do about the screws held in place with those dobs of silicone…

The real breakthrough, (for me), was recalling an old woodworking trick I’d seen demonstrated on television many years ago. When confronted with the prospect of a stripped screw hole, the DIY’er squirted a little wood glue into the hole, then inserted the appropriate diameter wooden dowel into the hole, cut the dowel off so it was flush with the surrounding surface, removed any excess glue that might’ve oozed out and finally re-drilled the screw hole in the dowel after the glue hardened. I was going to have to modify this approach a little bit to suit my roofing application, but the basic premise seemed to be reasonable – if I ran into holes in the underlayment that were too big, I’d just make them smaller by inserting a short piece of dowel.

But first I had to get the old screws – and those darned dobs of silicone – out of the way. Before I did anything, I marked every dob of silicone with a piece of so-called “blue tape” so I knew where I would need to use my woodworking trick later on, then I got down to removing the roofing screws, (see below). In this image you can see a mix of screws poking up with and without dobs of silicone surrounding them. After I’d removed a screw, I’d use a putty knife to scrape the silicone off the corrugated steel panel surrounding the screw hole.

The next step involved placing the new screws into, (or next to), each hole, pushing the tip down slightly into the construction adhesive, which would be starting to set up at this point. If I found a piece of blue tape beside a hole, I’d just lay the new screw next to the hole since the dowel needed to be inserted first. Oops, I seemed to have deviated every so often, (see image below)!

I’d push the 1/8 inch diameter dowel down into the hole about an inch, and as you can see in the image, (above), set the tip of the new roofing screw at a slight angle, then using the driver, run the new screw in. The screw pinched the dowel against the corrugated steel panel and severed it cleanly so it was flush with the panel, then as the screw was driven into the hole, the threading on the screw pinched the dowel against the underlayment thus achieving the tight fit I was striving for.

After every screw was in place for an entire panel, I’d go back with a 1/4 inch ratchet and hand-torque each screw one last time. 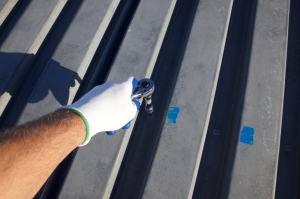 This next image, (below), depicts a finished row of new roofing screws from left to right, (you can spot them right in the center of the photograph). Interestingly, you can also see an entire row of the 5/16 inch head self-tapping screws toward the very bottom of the image, (again stretching from left to right).

The last step was to go back and count the number of pieces of blue tape per panel so I can evaluate the effectiveness of the construction adhesive and dowel methodology next spring, (then I removed the tape). The next-to-last image, (below), captures the entire length of a corrugated steel panel, (looking north to south), after all of the screws have been replaced – no more silicone dobs!

Congratulations! If you’ve stayed with me this far, you must be a dyed-in-the-wool architectural enthusiast! 🙂

An unexpected, (and yet entirely explainable), observation both Martha and I made in the two weeks since I climbed off the roof for the last time is how quiet it is inside the house, even when it gets windy outside.

We’ve grown accustomed to hearing the occasional pop or crack, all of which are brought on by the expansion and contraction of the various materials comprising the roof canopy as it warms up during the day and cools down at night. It almost felt alive – the house seemed to be breathing in and out…

Now that I’ve cinched the corrugated steel panels down so firmly to the 5/8 inch tongue and groove plywood underlayment, the occasional pop or crack happens less frequently.