This page contains various updates we posted on the “Recent News” page throughout calendar 2019.

Martha captured these wonderful images in the Living Room at the Byrne Residence as 2019 drew to a close. We opted to spend the week of December 23rd in Tucson, visiting familiar favorites, exploring new spaces and enjoying the wintery – well, wintery for southern Arizona – weather!

Earlier today, Martha and I learned eight Frank Lloyd Wright sites have been inscribed to the UNESCO World Heritage List – we couldn’t be happier for the staff – and supporters – of the Frank Lloyd Wright Foundation! Here’s an excerpt from the announcement:

“After more than 15 years of extensive, collaborative efforts, eight of Frank Lloyd Wright’s major works have officially been inscribed to the UNESCO World Heritage List by the World Heritage Committee. The Wright sites that have been inscribed include Unity Temple, the Frederick C. Robie House, Taliesin, Hollyhock House, Fallingwater, the Herbert and Katherine Jacobs House, Taliesin West, and the Solomon R. Guggenheim Museum. The collection of buildings, formally known in the nomination as The 20th-Century Architecture of Frank Lloyd Wright, span 50 years of Wright’s influential career, and mark the first modern architecture designation in the United States on the World Heritage List. Of the 1,092* World Heritage sites around the world, the group of Wright sites will now join an existing list of 23* sites in the United States.”

You can read more by clicking here!

We had several friends/relatives reach out this past week to say they’d seen the Byrne Residence featured in the June 14th edition of The Week!

I just wrapped up a spring ritual at the Byrne Residence – spending a few hours over the course of two weekends on the metal roof, tightening down the zinc-plated roofing screws. 2019 was similar to 2017 and 2018 when roughly two-dozen screws needed to be removed and replaced using a process I described here. I captured this image right after I finished the last panel earlier today – isn’t it fun?

Oh, right, I track everything in a spreadsheet too!

I took the opportunity to also replace the outdoor-rated ethernet cable running from the “line of sight” microwave radio up on the roof, down into the scuttle above the Pantry, where the Apple AirPort Extreme access point is located.

You can see how I’ve encased it in 1/2″ galvanized metal tubing that zig-zags down and across to the vent where it drops into the scuttle, (originally installed in 2012, as described here). At either end, I’ve slipped a flexible piece of conduit over the cable keeping the exposed portion to an absolute minimum. These protective measures not only look good, but they keep the cable out of the sun on a roof that gets pretty warm in the summer!

I recently swapped out the front panel on the pedestal in the Utility Closet in the Garage, (see below). What I learned was sheet rock is not as flammable as plywood, and apparently is required to meet building code in this type of installation. I used 1/2″ aluminum “L”-shaped trim along the bottom to protect the edge of the sheet rock, and 1″ aluminum “L”-shaped trim along the top to cinch it tight to the galvanized cover of the pedestal. …wanting to replicate what Bill Byrne had done many years before, I opted to trim out either side using some of the left-over cherry we still have on hand!

Lastly, I decided to pull out the orbital sander and refresh the surfaces of the planks on the picnic table I restored several years ago. The plank refreshing process takes about two and a half hours, all told – 90 minutes sanding and about an hour applying the linseed oil. I think the results are stunning! 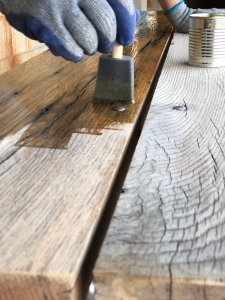 …and I see more wood-fired pizza in our future! 🙂

The San Francisco Museum of Modern Art is celebrating The Sea Ranch with the exhibit “The Sea Ranch: Architecture, Environment and Idealism”, through April 28th.

Let’s start with a critique of the exhibit by John King, the San Francisco Chronicle’s urban design critic, “SFMOMA’s Sea Ranch exhibition dwells on an idealized past”.

Next, a two-part, long-form feature, “‘Paradise at the end of the world’: An oral history of the Sea Ranch”, by Kelsey Keith and found on the Curbed website. Part I here and Part II here.

Martha and I will be visiting the exhibit in early April – can’t wait to explore!

On February 21st and February 22nd it snowed at the Byrne Residence! Many readers may recall previous posts about snow, (we have experienced it a few times before – once earlier this year), but this was an event for the record books! 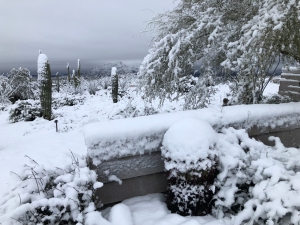 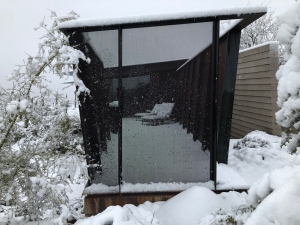 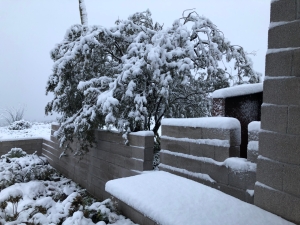 …and, yet, spring beckons!

A dear friend sent Martha a link to a podcast on USModernist Radio, featuring Will Bruder. In their words…

USModernist took 25 fans of the podcast to tour Phoenix, Arizona last November. Phoenix is the home of the Chimichanga, which Tucson disputes, but more importantly for us, the city is home to some really great Modernist architecture. We saw the Musical Instrument Museum, Frank Lloyd Wright’s Taliesin West, Paulo Soleri’s Cosanti and Arcosanti, Wright’s First Christian Church, and the David and Gladys Wright House, among many other amazing buildings.

One of these was Phoenix Central Library, designed by Arizona’s Will Bruder. Largely self-trained, Bruder apprenticed with Paolo Soleri in woodwork, metal work, and masonry and contributed to Soleri’s book Arcology. After graduating from college in 1969, Bruder apprenticed with Gunnar Birkerts, assisting in design of the Contemporary Arts Museum in Houston. He opened his first studio in 1974 and in 1987 was a fellow at the American Academy in Rome. Host George Smart interviewed Bruder in the lobby of the Embassy Suites right off Central Avenue, just a few blocks up from his Phoenix Central Library.

Martha and I wanted to wish everyone a Happy New Year! I’ll be updating this page a little later on today with a photograph or two, (or maybe a video), highlighting the weather at the Byrne Residence on the last day of 2018!