The sun has been steadily marching northward on the horizon as we approach the summer solstice. We’ve observed some remarkable visual treats in recent weeks as a result of the shifting sun.

Our so-called “oasis of calm” on the Lower Level is proving to be just that. The entire space glows as the sun beams down the two story light well and off the polished stainless steel framing the aperture. 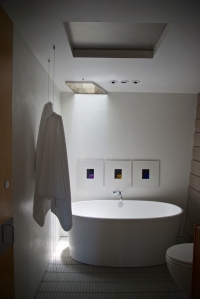 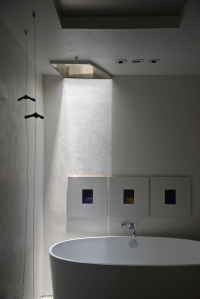 This next image was taken as the sun was setting a little over a week ago. The sandblasted texture of the OSB panels on the ceiling is fully illuminated for just a few minutes each evening at this time of year. The texture of the OSB reminds us of suede. Notice the fantastic glow on the Gloria Graham ceramic vessel in the background contrasted against the velvety surface of the Robert J. Medford ceramic vessel in the foreground.

We’ve had an unusual amount of precipitation recently, including a brief shower in the early morning two days ago, (on Wednesday), which is very rare for early June! Happily, this means cloud formations are constantly changing overhead…

Martha captured this image at the top of the driveway, looking southeast toward the low “L”-shaped CMU wall that borders the western edge of the driveway and the street. The corbel is visible right behind the corten steel post supporting the house number. In the lower right-hand corner you catch a glimpse of the north-facing CMU wall of the garage.