The final walk-though was almost a month ago – yikes!  Before June completely slips by, I thought I’d post an update, along with several photographs Martha captured as the project was drawing to a close.  In short, we could not be happier with the outcome!

First, an image, (below), of the path, lighting, repositioned dry stack rock wall and new plant material viewed from the lower level patio looking west. The landscapers also took great pains to redistribute the so-called “rip rap” around the site to replicate the naturally-occurring desert pavement found on the undisturbed portions of the property.

Next, an image, (below), of the path, lighting and new plant material viewed from the lower level patio looking east. If you were to compare this to earlier photographs of the same area, you would see we’ve pushed the path out away from the house to allow for desert plants to flourish up close to the framed views from the lower level living room, library and laundry room. Additionally, the slope of the path is not as steep as it winds up and around to the enclosed deck off the master bedroom.

These next two images are of the exterior stairway, one taken from the lower level landing oriented to the north “canyon” wall, (first image below), and the other from the same vantage point, but oriented to the south “canyon” wall, (second image below). Now that we have delicate plants interspersed with the rock salvaged from the original dry stack stairway and the corten steel starting to oxidize, we can see what Todd Briggs envisioned for this very special spot – bathed in sunlight in the morning and early afternoon, transforming into a shady respite from the heat in the late afternoon and early evening. We’ve even spotted signs of the vine starting to peek out between the rocks right up against the south wall! 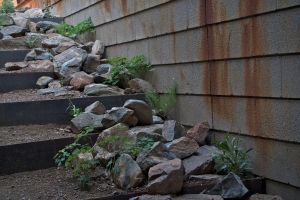 This next image was taken from the auto court looking south and slightly west toward the front walk and entry. The mesquite was pruned in the spring, and the wonderful dappled pattern of shadows on the surrounding concrete pads really accentuates the textures of both the hardscape and new plant material. If you’ve seen earlier images of the entry area, you’ll notice some rather significant changes – we’ve removed all of the “rip rap” and substituted smooth river rock of varying sizes around all of the concrete pads, as well as in the planting beds surrounding the front entry.

This image, (below), was taken very early a day or two before Martha wrapped up her trip. Several hints of the path that winds from toward the top of the driveway diagonally down toward the corner of the west wall of the patio enclosure, (then bends south and down the slope), are visible in the center of the image, along with the low voltage lighting we installed along the path. Much of the volunteer growth from the past 14 years has been removed – you can now see the back of the garage, (west wall), the guest bathroom and bedroom, as well as the A/C enclosure more than you could have a few months prior. We’ll carefully balance the need to manage volunteer growth against the need to manage potential fuel for wildfires as the site begins to heal once again. If we’re successful, human intervention in the form of pruning, debris removal and periodic plant replacement will be almost imperceptible in the coming years.

I find the random re-distribution of rock material reclaimed from various locations on the site particularly appealing. Todd Briggs refers to this as the re-introduction of “desert pavement”, and I think it looks fantastic! 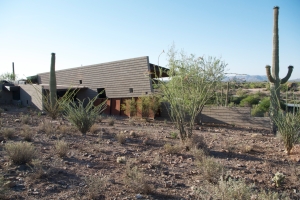 He also suggested we carry the theme of river rock out to the west-facing patio – we removed more “rip rap” from beneath the “fire and ice” feature and replaced it with a mixture of large and medium-sized river rock, (seen in the photograph below). I was particularly struck by the stark contrast between sharp/reflective surfaces, (the glass shards and the stainless steel pan holding the shards), and smooth/dull surfaces, (the corten steel framing the area filled with river rock and the individual river rocks themselves). I’m definitely looking forward to when we can start warming up the patio on chilly winter evenings! 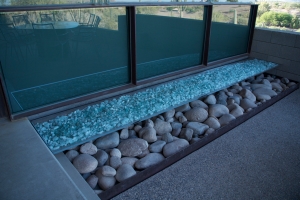 We opted to use “rip rap” along the edges of the driveway and auto court, as well as in the planting beds that border the auto court to the east and south. This image, (below), was taken from the southwestern corner of the auto court, right at the edge of the walkway leading from the auto court to the front entry, looking east. The rock contrasts nicely with the plant material selected for this area, with the ground-hugging cacti really setting off the lovely ocotillo specimen installed in the planting bed mid-way along the southern wall of the auto court. In the evenings, the ocotillo is illuminated, drawing your attention down the length of the driveway from the street toward the tranquility of the sunken auto court and front entry. 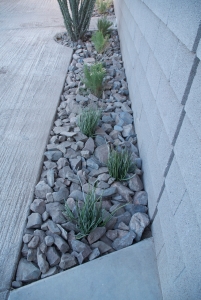 I thought a couple of “in-progress” photographs might be a nice way to conclude this post. The first, (below), is of one of the irrigation system installation crew carefully scooping pea gravel into the bottom of each valve enclosure. When I asked the project manager about this step, he said this was done to make potential repairs in the future less susceptible to clogging due to dirt getting into the exposed valve and/or PVC pipe. In fact, the pea gravel is layered on top of landscaping cloth that’s cut to fit around the PVC pipe, valve and interior of the valve box itself. The thinking is if there is standing water in a valve box due to a break or malfunction, the landscaping cloth and pea gravel will keep the amount of mud that might build up inside the enclosure to a minimum.

Martha took this photograph, (below), shortly before Memorial Day from the Dining Room, looking southeast. You can see the subtle difference in color between the decomposed granite used to create the foundation of the path by studying the small mounds and comparing them to the surrounding desert. Martha and I were both impressed by how involved the path creation process turned out to be! First, the course was carefully mapped out with water soluble paint, then flat-bladed shovels were used to create a 3 to 4 inch deep depression, after which the decomposed granite was wheeled in, carefully spread and mechanically-compacted to create a firm base. The final step was to gently sprinkle a thin layer of the surrounding desert material across the surface and wet it down to bond with the decomposed granite to blend the edges of the path back into the site itself. Amazing! 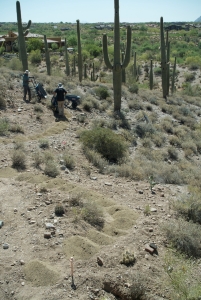 If you scroll back up to the first photograph in this post, you can see how effective this last step was too! I’m looking forward to my first trip back to the Bryne Residence in the fall – taking a leisurely stroll around the property on these wonderfully-constructed paths to enjoy the new plant material is going to be at the top of the list of things to do upon my arrival!