As I had mentioned last month on the Recent News page, we wrapped up the swapping out of the plumbing fixtures in late July, and the results are spectacular! The Hastings Vola fixtures suggested by Will Bruder’s office were originally introduced in 1968 after the designer, Arne Jacobsen, was contacted by the owner of Vola A/S, Verner Overgaard, some 7 years before.

These first two images, (below), are of the Laundry faucet. You catch glimpses of two different John Garrett works, one in each photograph. 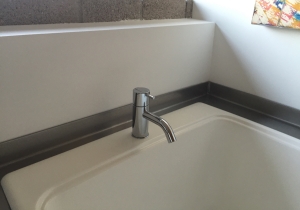 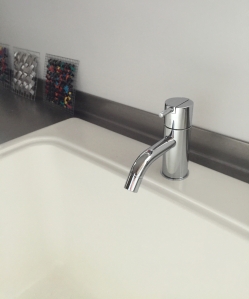 This next image, (below), is of the Guest and Master Bathroom faucets. The new “folded” mirror with a 5″ sandblasted edge, backlit with a dimmable LED ribbon still knocks us out! 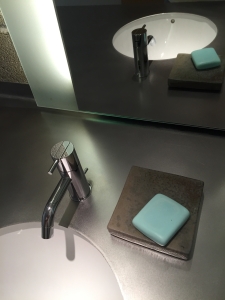 The next image, (below), is of the new Kitchen faucet. We also opted to add a vegetable sprayer, seen there on the right, since the Franke sink has two separate compartments. We took this opportunity to go ahead and order a new grille and vegetable basket so the entire ensemble looks brand new! 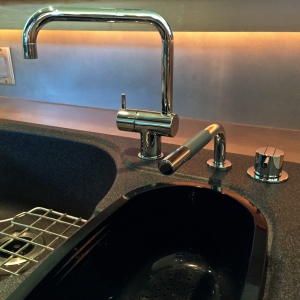 The next image, (below), is of the Guest Bathroom shower fixtures, mounted atop a 7″ wide and 52″ long sheet of 14 gauge polished stainless steel. Notice the reveal at the top where the stainless steel extends beyond the glass toward the ceiling, (and surrounding the shower head itself). We were thrilled with this new design detail from Will Bruder’s office! 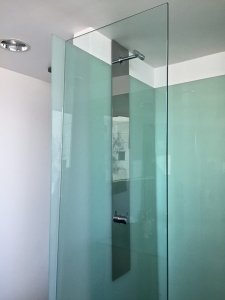 This next-to-last image, (below), is of the Master Bathroom shower fixtures, again mounted on a 7″ wide and 64″ long sheet of 14 gauge polished stainless steel. The same reveal can be seen where the stainless steel extends beyond the glass toward the ceiling. 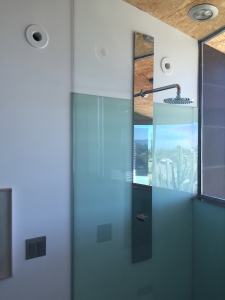 …I thought an “action photograph” illustrating the wonderful rain shower effect would be fun too! 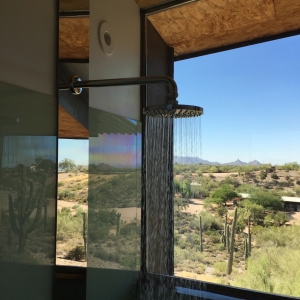